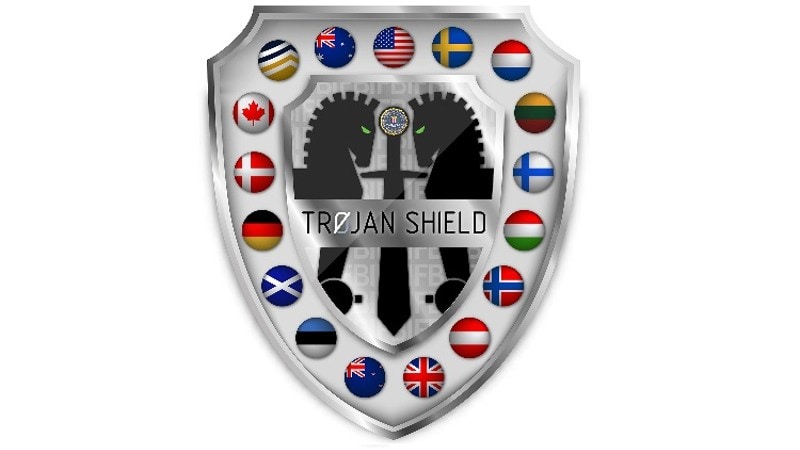 A prominent role in Operation Trojan Shield was played by the FBI, the AFP, the Swedish police, and the Central Unit of the Netherlands Police. All these partners worked closely together. In total, 16 countries were involved in the operation.
Millions of messages from criminal groups were intercepted and subsequently analysed and interpreted using specialized software. On ANOM, criminals communicated in forty-five languages about things like trafficking in drugs, arms, and explosives, ram raids, ATM gas attacks, armed robberies, and, last but not least, contract killings. Most of the messages were in Dutch, German and Swedish.

Over the past few weeks, actions took place in several countries, based on information from the intercepted messages. By now, the police in the Netherlands has arrested 49 suspects, dismantled 25 drugs locations (production, storage and tabletting locations), and seized large quantities of drugs, 8 firearms and 2.3 million euro. In a series of police actions yesterday, various arrests were made throughout the country, and various premises were searched.

This is not the first time the international police and judicial authorities have shown that criminals cannot trust crypto-communication services. In the investigations into the crypto-communication services Encrochat (July 2020) and Sky ECC (March 2021) the police were able to read over the shoulders of a large number of criminals in real-time. After Sky ECC was taken down, ANOM’s popularity soared. In the end, hundreds of criminal organizations were using this platform. It had a good reputation among criminals, who praised it to one another as the platform to use, because of its absolute reliability. But nothing was further from the truth!

In the Netherlands, the Central Unit of the Netherlands Police played a major role in this investigation. The investigation was conducted under the authority of the National Public Prosecutors’ Office.
The Central Unit continuously plays an important role in these sorts of international operations, because of its experience in crypto-communication and its specializations in the areas of cybercrime, intelligence, and tactics. For this large-scale operation, the Central Unit developed innovative software that enabled officers to analyse and interpret millions of messages. This software was made available to Europol so that it could analyse the data, and Europol provided the results to other countries.

In this investigation, the focus of the Central Unit lay on identifying the criminals that were using ANOM; for this the officers used specialized software. ‘In this way we are increasingly gaining a better view of the murky depths of the pond of international serious organized crime. We are detecting more and more connections and obtaining an even clearer view of criminal networks. The millions of intercepted messages have further enhanced the wealth of information the police gathered during the investigations into Encrochat and Sky ECC. The evidence in numerous ongoing investigations in the field of undermining crime is mounting and becoming ever stronger. The information in the messages enabled us to prevent serious crimes. In addition, the messages contained a host of information about serious organized crime that the police were not yet aware of’, comments Jannine van den Berg, Chief Constable of the Central Unit.

Operation Trojan Shield deals an unprecedented blow to criminals all over the world. The police are constantly working on new, innovative ways to stay ahead of criminals. And after this action too, the police’s relentless efforts to track down, dismantle, and prosecute criminal organizations will continue unabated.